Today I’d like to introduce to you a fellow children’s picture book author, Harri Romney whom I had the pleasure of interviewing. She has just released two new picture books titled CLUNKEY MONKEY and A DOG CALLED DOG. Harri not only writes the stories she is also the illustrator.
ABOUT HARRI 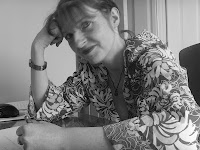 Her stories are children’s fantasies, mostly written in narrative verse. She considers rhyming verse to be one of those cherished characteristics, that modern children should be given the opportunity to enjoy.

First off, could you give us a little teaser about what Clunky Monkey is about? 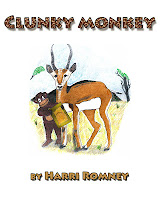 Clunky Monkey is on her way back home when she discovers a picture of a beautiful dancing couple.  She goes to visit the wise gazelle, in order to find out exactly who these strange dancers are.  Fascinated by what she learns, she wants to learn this ‘ballet way’ too, but Clunky Monkey’s family are a funky disco dancing troop, therefore it will not be easy for her to break from tradition to becoming a ballerina instead.  The accident prone monkey tries to follow her dreams, even though most of the jungle creatures ridicule her.


What made you write a story about a monkey?
I honestly can’t remember...   I remember the inspiration came to me one morning. I can even recollect where I was standing too, but cannot recall exactly what trigger inspired that picture book.


How did you come up with your cute title?
I do remember that a book about a funky monkey seemed too cliché; this is how I deviated from writing about this.  I recollect changing the original storyline from a monkey that should have been funky, into an accident prone monkey instead (while she was trying to learn ballet).


What process do you use to do your illustrations?
Examples of my illustration work can be found on the link http://www.harriromney.com/gallery-4/ .  I’m what you’d call a technophobe, so I just prefer to use pencils and paint pens rather than Wacom technology.  My husband enhances colours and removes smudging using a computer, before publishing the pictures.


Who doesn’t love a Clunky Monkey! Well this Clunky Monkey wanted to change from her families’ way of funky disco dancing. She wanted to dance like a ballerina. So she finds her graceful giraffe friends and asks them to teach her. But, it wasn’t so easy for this Clunky Monkey. She had to practice day and night!
This story is told in rhyme with a good message about going after what you really want. The repetitive line “your ballet dancing nonsense is spoiling the day!” really added a charming touch to this little story. The ending has a very satisfying conclusion and will leave readers with a chuckle.
The illustrations are cute and will have the little ones laughing!

Thanks to Harri for giving me the opportunity to interview her, it's been a pleasure! I wish her much success with everything she does.