Calling all stay at home moms/writers!! Okay as some of you may know, I was layed off from my regular full-time job last week. The company I was working for had another big layoff in April 2011 and then cut everyones pay by 5% before Christmas. There were all kinds of rumors going around the office of another lay-off so I was preparing myself for the worst. I was an administrative employee at an engineering consultant firm so as you may guess, administrative people aren’t all that important in the eyes of the company. Anyway, I had been preparing myself and my husband that if it happened to me, I was not going to go out seeking another job in the office, but I would find a way to make myself a fulltime writer at home. 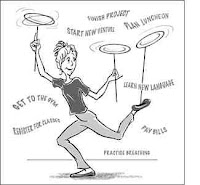 But geez, not only am I not making any money but I’m finding it very hard to balance out my day. There are so many things around the house to distract me. Like cleaning, walking the dogs, dying my hair, Dr. Phil , Ellen and my favorite… naps. I never realized how long it takes me to actually get going in the mornings when I don’t have an office to go to. Why is it taking me so long just to eat my breakfast and drink a cup of coffee? When I had to go to work, I didn’t even drink coffee until I got to the office! I got up, ran in the shower, got dressed, ate my cereal and out the door. No problem. But now, I’m finding it a major task to even TAKE a shower!! I’m too tired when I first get out of bed and then before I know it, I’ve wasted 2 hrs and I need to get to my computer, not the shower. I’m starting to stink!!!
How do you stay at home moms and writers do it? Can you give me some tips to help balance myself? Do I need to just overlook the mess and not clean until a specific time of the day? Or am I completely getting ahead of myself since it’s only been one week now?  How long did it take you to get yourself adjusted to be a productive stay at home worker and not end up a stay at home… bum.
Encouragement people… I need encouragement!! Ugh.
Posted by Allyn Stotz at 9:49 AM 18 comments

And the winners are...

Thanks everyone for participating and as Rachel Ray would say, "I'll see ya when I see ya!"
Posted by Allyn Stotz at 10:02 AM 3 comments

Hello everyone! Thusdays are my normal blogging days but I'm not going to say much today. I was laid off from my job yesterday so I'm feeling a bit down and don't want to sit here and boo hoo everyone to death. I'm sad but also looking forward to now becoming a full-time writer!! Something we writers all dream of. Luckily I have a husband who  is a wonderful provider so financially, I don't have to really worry. But I do love making my own money. It's part of who I am so when I'm not making a regular paycheck, my self esteem goes down, down, down. But I'm going to try like heck to not let that happen. I'm close to turning 55 and looking for another fulltime job sounds horrific for me!!!

Ok, enough of that. Instead let's switch to something more positive... like my latest book review posted here: http://www.beautifulbooksforchildren.com/private/gpbkrnIbEo. This is a great site for mothers and everyone should check it out.

Her review was very thorough and positive, but she mentioned that I should have led Kailee into the frig to try out fresh veggies because those are better for you, therefore she only rated my book a 4. (Darn, I like 5's!! LOL) I do understand her reasoning but when does it ever end with people always finding things wrong? If you've read my book, do you agree with her? I'm just wondering for my future reference.

Don't forget that I will be announcing the winners tomorrow on my blog for a free book and coloring book version of The Pea in Peanut Butter!
Posted by Allyn Stotz at 9:56 AM 6 comments

Happy New Year everyone!
Whew… I put a pair of jeans on this morning for the first time since being off for the Christmas holiday and they actually still fit!! I was so afraid I’d eaten myself into another size but thankfully that hasn’t happened yet. But if I don’t get a hold of it now, I’ll have to start wearing my fat jeans again!
Truthfully though, that is just another reason why writing has helped me. If I can put my mind to becoming a children’s picture book writer and actually get published than surely I can find that same strength and willpower to lose some weight! Getting published in 2011 has given me the power of positive thinking that I really never had before. Sure I’ve been positive about many things in my life; however it always seemed to go in reverse for me. EXCEPT with my writing! Positive thinking and working harder than I’ve ever worked on anything else in my life, has truly proven to me that I can do whatever I put my mind to and really want to accomplish. So losing some weight this year is definitely on my list of “positive” things I must complete in 2012. What’s on your list? 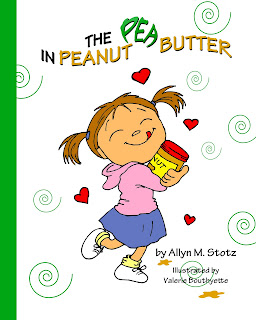 Of course I have lots of writing goals on my list as well. One of which is to try even harder this year to market my book The Pea In Peanut Butter. So the first thing on that list for 2012 is to giveaway  a free copy of the book and a free copy of the coloring book version. I’ll be giving away one of each to two lucky winners! I will assign each comment a number and let a random number generator pick the winners. You will have until Thursday, January 12th to comment. Each comment counts as a chance to win as long as you follow the guidelines listed below.
(1) Follow my blog if you aren’t already a follower;
(2) Comment on this post and tell me one of your goals for the year;
(3) Then tell me how you intend on accomplishing that goal.
(4) Make sure I have your email address so I can notify you of your winnings.
I wish all my friends and followers much success and happiness in 2012 and goodluck with the giveaway!
Posted by Allyn Stotz at 7:39 AM 15 comments