Our trip to New York City

My husband and I finally took a real vacation last week. We've been married 35 yrs. and only taken two real vacations. Once to Cancun, once to an Alaskan cruise and now to NY City. We aren't big travelers but never had the option to be when I was working. I wasn't able to stay on a job long enough to get more than two weeks vacation because my husbands job was always transferring us. So with only 10 days all year and both our families living in different places and far away, we've always had to use up my 10 days visiting family. Not that we didn't love doing that, but once in awhile a person just needs to get away from everything and go have some adventures and see new things!

Anyway, New York is a place I have always wanted to see so my husband decided we needed to go there to celebrate our anniversary. And I'm glad he did. We both really needed the break.

New York is a spectacular city and there is certainly a lot to see! We didn't get to see everything we'd planned because some of the lines to get in were just too long for two people who have zero to no patience! 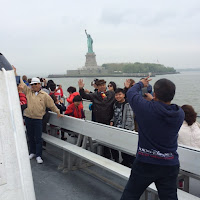 We had quite the adventure on the ferry boat to see the Statue of Liberty. What we could see was quite magnificent but mostly what we saw were people crowding in front of the views taking selfies! What has become of us! People are obsessed with themselves these days. (Hmmm, do I see a "selfies" picture book in my future!)

We saw a few people who never sat down. Never once even took in the views. All they did was pose for selfies. It was insane! We just had to laugh because if we didn't do that, I would've lost my cool and started yelling at people. We couldn't even take a picture of ourselves because every photo we took had a stranger in it. So we both just decided to jump on board and include strangers. Here is one of a family taking a photo and I just decided I'd jump right in. Don't I look like them? 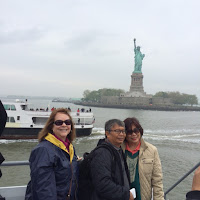 And here is one where my husband just held up his hands and said, "What the heck!" The lady behind him in red has no clue what anything looks like. She never stopped taking her selfie once during the entire cruise! Where is she going to put all those photos of herself! 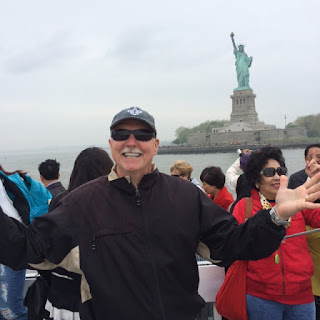 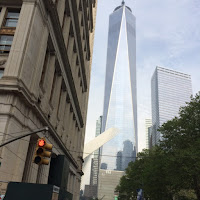 One of the most beautiful, but chilling things we saw was the new Freedom Tower. It's magnificent but gave me goose bumps realizing that is where thousands of people lost their lives on 911. So sad. But New York really did a great job of memorializing this event. 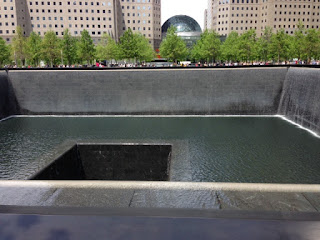 The two waterfall holes where the actual towers stood, was magical. You may not be able to get the full affect from this photo but this is a waterfall with water running from all sides and down into the hole in the middle. Each person that lost their lives name is engraved on this memorial. You couldn't help but feel sorrowful but proud that we will never forget those people who died in that horrible tragedy. 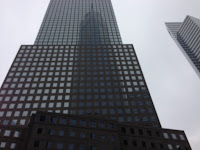 This is a cool photo that is kind of "eerie." It's the reflection of the freedom tower from a building across the street. Neat. 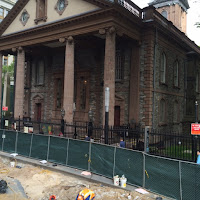 And as amazing as it was, here is a 200 yr. old church that sits right in front of the towers but was never damaged. Incredible! 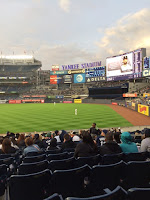 A dream of my husbands was to step inside the Yankee Stadium and see a game. We did! And I even got to sit beside a very interesting couple who were from Australia. This was her first baseball game, ever!


Central Park was absolutely gorgeous. A lot of walking, but worth it. 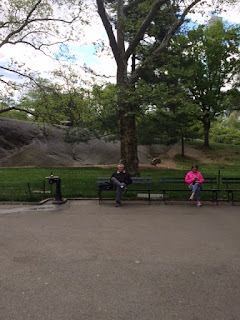 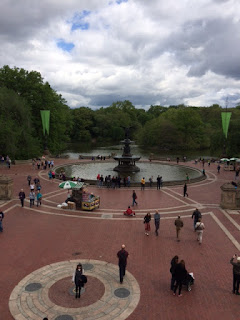 This next photo, I don't remember exactly where it was but it's a tunnel waterfall. My husband is standing inside it. There is water on top and all sides flowing down. So cool! 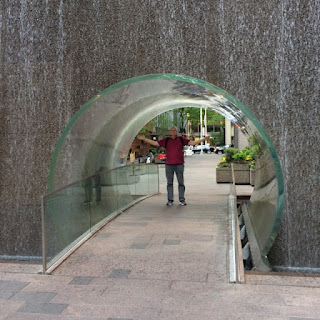 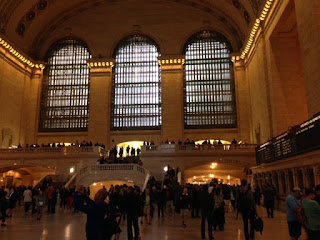 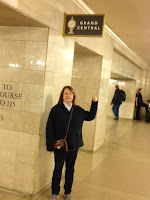 The last place we went to was Grand Central Station. It was cool but I was a bit disappointed. I guess I've seen too many movies with it in there. I expected benches in the middle where people were waiting for their trains, there were none. I expected to hear the choo choo of trains, I heard nothing but the masses of people moving about. But it was still exciting to know I was there!

Lots and lots of fun stuff to see in New York. I especially enjoyed seeing the Lion King musical and a comedy play called Shear Madness. One of my most exciting moments was when I got to look through the window at the Good Morning America studio and saw Amy, Robin, George and Lara. I watch them every morning while I wake up and drink my coffee. So it was great to see them and the studio in the flesh. However, they sure make everything look bigger on TV!

The crowds of people in Times Square was unbelievable. I thought New Orleans and Chicago were nuts, but they are nothing compared to Times Square. I felt like I was in the center of Mardi Gras in New Orleans and that is a mess, let me tell ya! We did NOT enjoy the people everywhere part of Times Square at all or the traffic. But I was very surprised how nice all the people were who actually lived there like the restaurant people, hotel people, etc. etc.  And for a person who has lived in Louisiana and Texas where people hug you after meeting you once, that is saying something!

We loved our adventure but there's nothing like getting back to our "Home Sweet Home" and hug our doggies.

First off, I'd like to let everyone know that I am now offering critiquing services for picture book manuscripts. Picture books are my passion and I would love to help others polish up their stories and get them ready to send off to publishers. Click on my Critiquing and Design Services tab for more information. 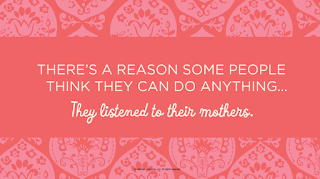 But more importantly, Happy Mother's Day to all the mothers out there, especially my own mother and mother-in-law. My mom had a rough week last week but came through it like a champ. It's great to hear her talk about plans for the future and all the things she has to look forward to. My mom is a strong woman who knows who she is and has always made her children feel loved. We've had our differences in life but have always overcome them and become closer. Now that we have our writing in common, we have tons to talk about and constantly give each other encouragement. My mother has always had faith in her kids and never failed at giving us the confidence we needed to conquer our fears. I love you mom!

I admire my mom and also my mother-in-law. Even though neither she nor my own mom were crazy about my husband and I getting married, she has always welcomed me into her home and made me feel like a part of her family. Her love and support have been very precious to me and I am one of the lucky people who wouldn't trade my mother-in-law for anyone! I love you too, Vi! 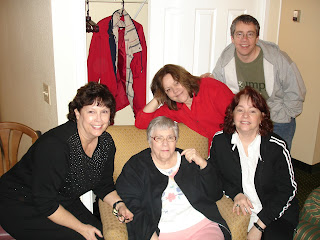 Mother's are a special breed. Not everyone is cracked up to be one and even those that are mother's, may not do it well. But if you have love in your heart for your child (or pets, in my case) and they feel that love, than in my opinion that's the most important part of mothering. Even when my own mother and I disagreed or got in an argument about something, there has never been a moment when I doubted her love for me or my siblings. And that love has carried us all through some difficult times.


To all of us who are fortunate enough to still have our mother's, let's give them an extra big hug this year. And to those that have lost their mother's, blow a kiss towards heaven, I'm sure they're waiting for it! 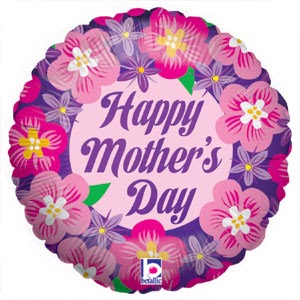