BOOKS THAT SHOULD BE MOVIES

How great is it that the "Hunger Games" series is being made into a movie! While I was reading that book, I just knew this story had to be seen on the big screen. Although it’s really a disturbing concept, it was one that was very unique and well thought out. Why couldn’t I have thought of it? I am pleased to see that most of the actors in that movie are basically unknowns. I hope they are ready for what starring in that movie is going to do for their lives from here on out! 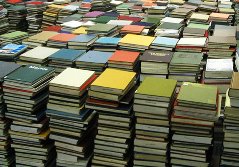 With all the wonderful books that authors create, why does the movie industry keep insisting on remaking some movies over and over and over. And now they are even reshowing some of the same movies on the big screen again. For instance, Titanic is once again on the big screen. Why not use their money to make something new? I admit, I loved the Titanic, however I will probably NEVER watch it again as I thought the parts where the boat sinks and the people are flying off the boat to their deaths way too disturbing. I really don’t want to watch real life death scenes happen over and over again.
I would love to see some more of V.C. Andrews series made into a movie. "Flowers in the Attic" was made into a movie many years ago but I have never seen it reran again. I wonder who makes the choices on what movies to show over and over on TV? I watch a lot of the Lifetime channel on the weekends but get so sick of the same movies on all the time. There has got to be millions of movies on the shelves, so why not pick something that hasn’t already been shown 5,000 times!!
And when was the last time you saw a good love story on the big screen that wasn’t a romantic comedy? I can’t even remember. I think the last good one I saw was “The Notebook” and that was several years ago. Why not make some of Johanna Lindsey’s romantic books into movies? She was once my favorite author because of her knack for creating such great romantic characters. Her books used to be some that I just couldn’t put down. I fell in love with many of her men characters. And whoever created some of her book covers… ooh la laaa! When I was younger, I used to stare at some of those men on her covers for hours.
Another book I would love to see on the big screen is Dave Pelzer’s book series starting with “A Child Called It.” His is a true story of the abuse he suffered from his mother as a child and his journey from one foster family to the next. I don’t think that child ever received a day of love from his parents or grandparents. I believe his story is a true testament that people can survive in the worst of circumstances if they put their minds to it and forgive. I truly don’t know where he got the strength to carry on and end up living a normal, productive life and I think Hollywood should show his story to the world. His books are so sad and upsetting, but they are real life and after I read the very last one, I did feel strength. If he can pick himself up and become an author and speaker on top of living a normal family life, than anyone can.
Those are just a few of the books I’d love to see made into movies. What about you? Do you have any favorites that you think deserve to be shown to the world?
Posted by Allyn Stotz at 8:25 AM