Today is a wonderful day! I finally had the pleasure of interviewing my sister and mother about their newly released mystery/romance fiction novel Twist of Fate. It was published by Spectacle Publishing and is the first in the Sam Osborne detective series.

We've waited a long time for this to come out and they have worked their butts off to make it happen. I hope you enjoy finding out a little bit about them and their book.

What inspired both of you to become authors?


Sharon: I have always wanted to write and have had stories and characters running through my head all my life. In college, I majored in radio intending to write scripts for that medium. However, it was my daughter Allyn who actually inspired me to begin by pursuing her dream of writing children’s books and actually getting published.

Genilee: I’ve been writing creatively all my life, but my everyday job got in the way of trying to publish fiction. Once Allyn got started with her writing, she inspired me to be serious, and I began taking classes. Then when mom started writing books, I decided if she can do it in her 80s, surely I can pursue my dream in my 50s.


Why did you team up to write Twist of Fate? Who is doing what in the process of creating this book?


Sharon: I’m not very good at writing description, and I know my writing needs to be edited. I have only written plays and columns in the local paper. Genilee has been editing all her life, and she’s talented at putting the words down so others can “see” what’s happening.


Genilee: It’s always been my job to edit – I’ve done so for magazines and newsletters and just about everything. And a lot of my creative writing has been short stories or creative passages that have a lot of flair, but need a backbone. Mom’s creation of this series of detective plots gave me that backbone. It’s teaching me what goes into putting a whole book together.
Was it hard working with each other on this project, especially since you are so closely related? 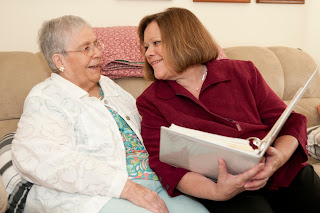 Sharon: It hasn’t been hard for the most part, though it’s always difficult for the person who creates the story to accept that someone else wants to make changes. But I’d say it’s been no different than any team effort. It’s give and take, and usually, a lot of fun!


Genilee: I’ve had to get over the daughter-always-eager-to-please impulse and try to put on my professional hat. We’ve had quite a few discussions that could have turned into arguments over book details, but they never did. Once you start looking at a project as a collaboration and once you both start liking the result, the back and forth becomes easy. And we’ve had some great lunches together coming up with ways to kill off people!


What do you think readers will enjoy most about Twist of Fate?


Sharon: I think they will like the love story. It’s two people who normally would never meet thrown together in unusual circumstances.


Genilee: The characters that mom has created are what I think people will love about this story and our next two books. She’s really good at coming up with people that are different, but believable as hero/heroine.


What were your biggest obstacles in getting Twist of Fate written and accepted for publication?


Sharon: I think we’d both say first that it’s ignorance of the process itself. Even after we submitted the manuscript and it was accepted, neither of us realized the work that goes into rewrite – catching errors or parts of the plot that need to be strengthened.


Genilee: For me, the biggest obstacle has to be time. I have a job that is sometimes more than full time so I’ve given myself an hour every day before I do anything for my job to work on something creative. But since I’m rewriting/editing/researching/submitting manuscripts, that doesn’t move the process forward at the speed we’d both like.


How did you come up with your characters in the story, Sharon?


My main character, Danny, has been in my head since I was in junior high. Everytime I sat down to write, he was there. But he is a homeless man, and I didn’t want him to appear pitiful or weak. It wasn’t until I created his mentor Gus that I could put him down on paper. Casey, his romantic interest, didn’t come to me until I sat down to write the story.


Who is your favorite character in Twist of Fate and why?


Sharon: Gus is my favorite character in this first book because he’s such a strong motivator. He has had a hard life but is determined to do right by the boy he takes under his wing—Danny. Also, as I’ve written these books, I’ve become quite fond of Sam, the detective.


Genilee: I loved Gus from the very beginning. Even though we’ve changed the book so that he appears gradually, he is so much a part of the plot. And mom’s right about Sam, the detective. As people read these stories, they will grow more and more fond of Sam.


Can you give us a little “tease” about what Twist of Fate is about?


The heroine Casey Lewis lives in a mansion with her servants as caregivers. She lost her mom and dad in the same accident that took away the use of her legs. When she turns twenty-one, she will inherit a company and a fortune; but someone has been trying to kill her. Danny Jones also lost someone recently—the man who taught him how to survive with dignity on the streets of the city. Through a twist of fate, Danny gets caught in a winter storm and fights his way through the blinding snow to an open window in Casey’s home. Inside that window unconscious is Casey. Danny rescues her and the two spend the next few days snowbound and finding out that despite their different backgrounds, they share the same passions. They pursue finding out who is trying to get to Casey with the help of Detective Sam Osborne.


Is this going to be a stand alone book or a series?


Twist of Fate is one of four books that features Detective Sam Osborne, who plays progressively more important roles as the books go along.


How long have you been working on the process of getting Twist of Fate ready for publication?


Genilee: Mom’s initial draft took about four months to write. My first rewrite took another four months. Then we started sending it to friends and family for a first read, which took a couple months. Locating a publisher took four months and we’ve been working on our first rewrite with that publisher since we signed a contract in October 2011. So in all, about a year and a half.


What has the process been like working with your publisher, especially since they are fairly small and new?


Sharon: Spectacle Publishing is a group of writers who are pursuing getting other writers into print. We have worked with a great romance editor – Tammi Albright – on our rewrite. But the firm’s greatest strength is that it holds mini-workshops for its writers to help move the process along. We have had two such workshops and they’ve kept our momentum going strong.


How are you both going to celebrate now that the book is finally published?


Sharon: I’m going to tell everyone I know what we did – share our happiness with family and friends. We’ve had a great support system throughout this process and they deserve to share in our celebration. Then I’ll start telling people where to go to buy a copy!


Genilee: I’m already celebrating. We’ve come a long way since those initial days of wondering whether we could do this. Next up: work on book number two!
I'm so proud of both of them and wish them all the success in the world! The book is available on http://www.amazon.com and barnesandnoble.com and is in both print format and kindle.
If anyone would like to order an autographed copy please contact Genilee at gsparente@verizon.net. And don't forget to check out their new blog at http://swopeparente.com/.