Are Weathermen Fiction Writer's Too?

Up north when a weatherman reports that it's going to snow, they mean it. It snows... it really snows! When they advise people to stock up on supplies, they are saying so for a good reason. It may be days before people will be able to shovel their way out of their front door. I have many friends from Ohio and other places up north who have posted pictures on facebook about the snow piles they have out their windows. And they are real.

I'm from down south and when our weathermen say we might get snow... they are living in a fantasy. Just like in our romantic fiction novels where the main characters are flawless. She with her long flowing blonde tresses, sparkling white teeth, size 28 waist, and voluptuous breasts. He with his sky blue eyes, bulging biceps, and mysterious character.

Our weathermen may as well be writing that fiction novel! I'm sure it's what they all dream of though. Bad weather. I mean isn't that what they study for in school? Just like a policeman studies and trains for "on the street action" a weatherman lives for the suspense of weather each day.

But down here we should know better. Do we really have to close schools for 3 days because we saw a snow flake somewhere? Or because we had sleet for 1 hour? Last week they were calling for sleet with a  possibility of snow. The news people were telling people to stock up on groceries. Stores were selling out of everything! Are we insane? Do we not have enough food in our pantries to last one or two days? All schools were closed the day of the weather threat, and two days afterwards! Why do we close schools when the roads are clear?

﻿
The "non-fiction" outcome of that threat was this: It began sleeting around 4:00 pm (everyone would have been home safe and sound by this time); it continued for about 2 hours and maybe a snowflake was mixed in from time to time. It was all over by 6:00 pm that evening. No more snow or sleet the next day but all interstates were closed anyway.  Not just the overpasses, but everything. They announced that they had plenty of trucks loaded with salt but you didn't see a single one on the roads. Instead, they just shut down the interstates and let the ice form because our temps didn't get above freezing for 2 days.

I was raised in Ohio so I know what snow, ice, and bad roads look like. I've had my fair share of close calls and wheels skidding in northern weather. 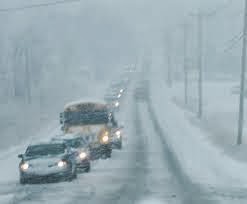 People who have never driven in real winter weather, have no clue and it's pretty comical. My husband and I spent three days laughing at all the warnings from the news and people panicking over a snow flake. But it's also very maddening.

I needed to go to Walmart, one mile from my house, but couldn't get there because they'd shut down the overpass in the area. And this was at 9:00 am and we hadn't had one drop of precipitation yet. It was just cold, that's it! So I had to take the back roads, ten miles out of my way.

When weathermen down here report threats of a hurricane, they are definitely reporting what they know to be true. They are experts. However, when they report winter weather down here, they surely are living in one of our character's dream worlds.
Posted by Allyn Stotz at 9:59 AM