Spotlight on Sue the Mingo goes to Mardi Gras 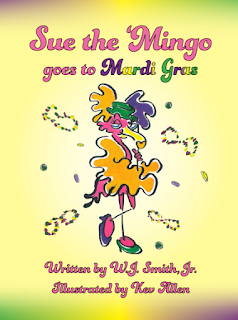 This is the second book in W.J. Smith, Jr’s series for children. The first book, "Sue The 'Mingo" was released in July of 2014. Sue is a flamingo with a colorful imagination!

A little history about how Sue the Mingo series came about:


When 2-year-old Kristian Smith visited the zoo with her family a few years ago she became enchanted with the pink flamingos and insisted on calling a flamingo a 'mingo. Her parents thought it was cute, and although the new word became part of the family's vocabulary, it didn't cross her dad's mind then that it would be the inspiration for a children's book he would author.

W.J. "Bill" Smith, Jr., of Watson, Louisiana, explained, "I always had the idea that I wanted to write a book, and when my father passed away three years ago, it made me think about my own mortality. I told my wife that I didn't want to wind up at the end of my life with a list of things I didn't do." His wife Cessely "Cissy" Smith asked what he wanted to do, and when he replied, "Write a book," she simply stated, "Then do it!"

And so he set about writing, with the encouragement of Cissy, Kristian, who he says is now “8-years-oldgoing- on-20,” and son Patrick, 15. Recalling Kristian’s ‘mingo misnomer, Smith decided to write a children’s book about a flamingo named Sue who would have the same “sassy” personality as his daughter. “Choosing to write a book for children just felt right to me. I created Sue the ’Mingo because I wanted the book to have some relevance to my family. If Kristian was an animal she would want to be a flamingo!” he laughed.

Smith proceeded to write the book and learned a lot about the process of publishing. He estimates it took about 11 months from developing the concept for the book to having it printed. 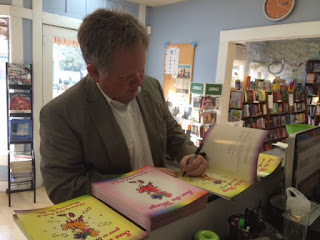 “Sue the ‘Mingo” is about a color-obsessed pink flamingo who contemplates what it would be like to be a different color. It’s entertaining with its catchy rhythmic rhymes and colorful illustrations and along the way also teaches colors.

Once it was written, he passed it around to family and friends, and everyone encouraged him to get it published. He eventually decided to self-publish through local printers after discussing it with other authors. “I really wanted to go ahead and get it published without the delay of submitting it.

Sue the Mingo goes to Mardi Gras is a cute rhyming picture book for children. Sue, the pink flamingo, is color obsessed and dreams of what it would be like to be other colors.

Kids will get a kick out of this book and learn what colors are prominent in New Orleans, especially during Mardi Gras.

The illustrations could be bigger with more vivid detail but all in all, they are enjoyable.

Most children, and adults for that matter, are fascinated with pink flamingos. Therefore, I have no doubt they will love going on an adventure with Sue the Mingo!

Both books are available at Cavalier House Books in Denham Springs, Louisiana; at The Idea Station in Watson, Louisiana; Oak Point Supermarket in Watson and Central, and at our Website www.suethemingo.com.