I have to face facts. I've been in a downhill funk with my writing for over a year now. My dad passed away February 2015 and ever since then, I've been finding it extremely hard to write. My whole 2015 felt like I was walking around in a tear filled fog that went by so quickly, I barely remember it.

All in all, I didn't do much writing last year but have regained my momentum, somewhat. However, for 2016 I am trying to spend my main focus on promoting the books that I have published versus concentrating so much on getting another manuscript accepted. This year, I have two more picture books coming out so I need to find more productive ways of promoting myself. 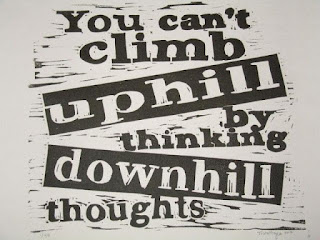 But it's a constant struggle. I am not a sales or marketing person so selling myself is extremely hard. I've been trying all that I know, but that isn't much. And it's not paying off very well. I've spent some money this year on advertising, but so far, that isn't paying off either.

I'm almost convinced that you have to be someone to sell a book. It's very disheartening since I'm a complete unknown nobody! Most of the people I know, which isn't many, have been sweet enough to support me but it's the ones that I don't know that I can't seem to reach. Being a writer is a constant uphill, downhill battle and the saying that "you really have to love it to do it" is absolutely spot on! I do love most things about this business and I worked extremely hard to get to where I'm at today, so I don't intend on ever giving up. I just need to find a formula that will work for me so I can climb the hill back up!

One of the biggest rewards in this business of writing for children for me is when I see a child who loves my books. When I'm at a book signing and a child comes up and loves the way my books look and their little face lights up when I tell them what it's about, is all the clarity I need to convince myself  this is my calling. I'm doing this for a reason! No matter how frustrating it gets.

Last week was a bad one for me. I was feeling defeated and depressed after working on my taxes. Well who doesn't, right? Anyway, it didn't last long because I received two beautiful photo's that brightened my day. This first one is my great nephew, Lincoln. He just got a new baby sister so I sent her a "welcome to the world" gift but didn't want to leave little Lincoln out. So I sent him my newest picture book, Cookies for Punch, along with some pretend dog ears to play like he was turning into a dog like the character in my book. Poor little Lincoln was born almost 2 years ago very prematurely. He spent the first few months of his life in the hospital. But he's a strong boy and bounced back with the speed of lightening! He has quite the personality too, one in which picture books should model their character by (and yes, my little mind is brewing up ideas). Anyway, to see him doing so well and enjoying my book so much, makes everything I had to do to get that book published, more than worthwhile.


This second photo is the grandson of my friend, Deborah Lynne. I don't know him personally, but feel like I do from everything his grandma has told me about him. Thanks for letting her take your photo, Eli!! 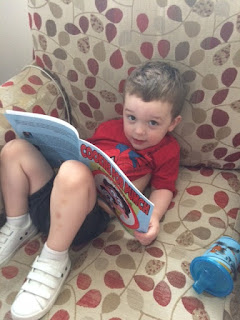 I just wanted to share all of this with any of you writers out there that might be feeling frustrated. You aren't alone, Not one bit. I think even the most successful authors have these same uphill, downhill battles. So don't give up. Any reward you might receive, even a photo, will show you that it's all worth it.